If you hike to the Aschinger Alm, you will smell the spicy scent of alpine herbs on the way. Later you will find the taste in the Aschinger cheese. Even as a child, Gerald Ritzer discovered the beauty of the vaults on his parents' farm, where cheese had been ripened for over 300 years. Fourteen years ago, he recalled the family tradition of cheese-making.

It is a short season on the alp, but it is productive. From mid-May to mid-September, the cows are on the alp and produce the best alpine milk. For 5,000 kg of cheese. Within earshot of their home, the Aschinger Alm. There they enjoy strong herbs, pure air and a fantastic view. Just like the guests of the alpine inn. Their herbs, however, grow in the herb garden and refine some of the dishes of the Aschinger Alm with homemade cheese, bacon and honey. "Since we produce our own cheese, the demand for our dishes has changed a lot. Our guests come specifically for our cheer dishes like the Kasspatzln, Pressknödel or pretzel soups," Gerhard Ritzer tells us. They process 25 to 30 loaves only of the Aschinger Bergkäse (mountain cheese) per year. The Aschinger Alm is known for this dow-to-earth Tyrolean cuisine. Unlike many of their colleagues, they can use their own cheese, matured for eleven to thirteen months, which gives their dishes that special flavour.

Using the knowledge of the older generation
Gerhard Ritzer's path to becoming an alpine cheese maker began with his interest in the vaulted cellar in the farmhouse in the valley. For 300 years it had been customary in his family to make cheese. But in his childhood years, the milk from the cows was sold to a large cooperative to make the work easier, and cheese was made in the former cheese dairy in the Mühltal, near the Fohlenhof in Ebbs. In 2004, Gerhard Ritzer began to make cheese himself with the help of the former Mühltal cheesemaker. At first he processed a small part of the milk, which he put in the vaulted cellar to mature after cheese-making. When he won three gold medals with his first cheeses, the Aschinger Bergkäse, the Aschinger Traditionell and the Aschinger Emmentaler, Gerhard Ritzer was convinced of his path. Since then, he has been cheese-making his milk entirely on the mountain pasture. He sells it in the farm shop - the Gasthof's customers are its biggest customers. At the moment he only produces hard and semi-hard cheese. In 2017, a fresh cheese including its own dish has been added to the programme. After a two-year trial period, the alpine cheese maker has brought it to market maturity.

Many paths lead up
Those who want to visit the Aschinger Alm have several options. On foot or by mountain/e-bike, a 3.2 km forest path leads to the alp from the Ledererwirt, just before Durchholzen. In winter, this path becomes a toboggan run. From the top station of the Durchholzen chairlift you can hike downhill to the alp in 20 minutes and then in another 20 minutes to the middle station. There, the summer toboggan run or a path with a view of Lake Walchsee lead down into the valley; by car, you can drive from the village centre of Ebbs over the Buchberg to the Alm. You can also hike this trail in one and a half hours. You walk along the fragrant alpine meadows, past some beautiful farms. Once you have reached the top, you will be rewarded with a fantastic view of the rolling hills of the Chiemgau Alps, Lake Walchsee and the Zahmer Kaiser. With specialities from the Tyrolean Gasthof with home-produced cheeses, you can gather your strength to make your way back. 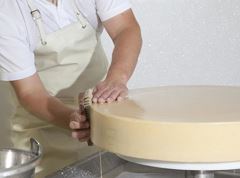 Short circular hike around the Aschingeralm with breathtaking views. 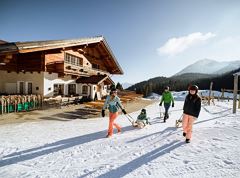 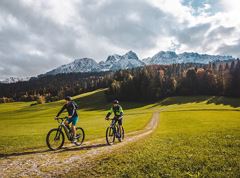 The easy, but condition demanding panoramic round tour to the Aschinger-Alm in front of the magnificent backdrop of the Zahmen Kaiser offers a gigantic view of the Inntal and the Walchsee. For...