Alpine Dairy Feldalm Ebbs - From one generation to the next

Alpine cheese from the Feldalm - Michael Jäger is the “Fritzinger farmer”
He comes from the oldest family farm in Ebbs. The “Fritzinger Farmer” has been a guarantee of quality for generations. Michael Jäger's parents switched their operation to organic farming. Their son runs the farm with the knowledge, tradition and vision that it needs to survive in the future. The part-time farmer spends summer with his young family and approximately fifteen dairy cows on the Feldalm.

Time for Quality - The best Alpine cheese from the Feldalm
Here, time seems to stand still: It is a picture, like from an old post card, which offers itself to hikers on the Feldalm. In a valley at the foot of the Feldalmsattel in the middle of the Kaiser mountains, there are a few alpine lodges scattered around. On the surrounding pasture, several herds of cows graze. Simmental cattle, Tyrolean Brown Swiss Cattle and Pinzgauer cattle can be distinguished by the marks on their hide. All animals have one thing in common: They spend every summer on the Feldalm, before returning to their farms in the valleys with their owners.

Alpine Dairy in the lofty heights
Six farms herd the cows up to the Feldalm each summer. They are organic certified and process their cow's milk on-site. Michael Jäger, the chairman of the agricultural association on the Feldalm renovated his Alpine lodge two years ago and build set up an Alpine dairy: Tangy alpine cheese is produced from the fresh milk. The cheeses lay in the basement, they are repeatedly rubbed with salt, in order to form the rind. The tasty cheese can be purchased after the alpine summer in the valley.

The Alpine summer is regulated by the so-called “Alp brief", as Michael Jäger explained. For generations, this document has recorded, how the Alpine summer should go: At the end of May, the cows are herded to the so-called low alpine pasture, to graze there. After approx. four to six weeks, they continue to the high Alpine pasture. Here, it is permanently 10 degrees colder than in the valley. The alpine climate is noticeable: The vegetation only grows once. The soft grass and spicy herbs on the alpine pasture are of very strong growth. They have to withstand the harsh climate and all kinds of weather - that's why they are especially high intensity.

Alpine life far away from civilisation
The cows are on these meadows all day long. During this time, the cows produce a milk of a very exceptional quality. The difference is already apparent in its look: Alpine cheese and butter are more yellow than the production from the valley. At the start of August, when the valley has been grazed, the animals head back to the lower pasture with their farmers. The herds stay there until mid-September, before heading back to the familiar barn for the winter season. On the Feldalm, according to tradition, there is also a Alpine Cattle Drive: When humans and animals return healthy, this is used as an opportunity to celebrate. It is a one-of-a-kind festival.

The community of the farmers of the Feldalm know it well. On the alpine pasture, there is no TV or internet. You're on your own. The Feldalm has been accessible by car for authorised persons since 1986. The farmers drive into the valley once or twice a week, in order to provide themselves with the essentials. They spend the rest of the time alone with their animals. All others can set off on foot towards Feldalm. From Walchsee, the natural jewel can be reached in 2.5 hours. From the Feldalm, there is an alternative route to the Stripsenkopf and the Stripsenjoch. You can also reach the high altitude trail and continue along this to the Vorderkaiserfeldenhütte.

From one generation to the next
The farmers, however, find plenty of opportunity to entertain themselves. After work, they sit together in the evening and tell stories from the past. The farms have been handed down for generations. Michael Jäger sees his property as a fief. You don't inherit the farm for yourself, but rather to take care of the agriculture. So that one day it can be passed on again. His son, Georg, is only five years old, but with his Tyrolean hat, he has already explored the alpine pasture and in this way is introduced to farming in a playful way.

In any case, the new alpine lodges provide a lot of comfort in comparison to the old ones: Michael Jäger built the lodges together with his family. The spruce wood used comes from their own forest in the Kaiser Mountains. The light-coloured wood stands our against the green background. But very soon, when the Alpine climate gnaws at the lodge, the wood will start to discolour and the new building will seamlessly blend into the surroundings. So it is with good things: They do not lose sight of tradition, do not destroy the past, but add something to it and continue to think about the present. This is what Michael Jäger's parents did when they switched their business to organic farming and what Michael Jäger did, when he adapted the alpine lodges on the Feldalm to new challenges.

Regional product marketing
The Feldalm should be preserved for future generations. In order to do this, Michael Jäger is taking a new direction when it comes to sales. Michael Jäger gives the majority of his yield to the organic cheese dairy in Walchsee. The summer milk is immediately processed into cheese and butter. When ripe - around three months after production - the cheese is sold from the farm in Ebbs. In addition to this, Michael Jäger started a farmer's market in the village centre of Ebbs. The market takes place every first Saturday of the month at the courtyard of the nursery. Around 15 farms from the Kufsteinerland and Kaiserwinkl region sell their high-quality products.

Sales on the farm upon request, the Feldalm alpine dairy is only open in the summer months.
Feldalm - Hier ein kleiner Einblick
Homepage - Almkäserei Feldalm Ebbs 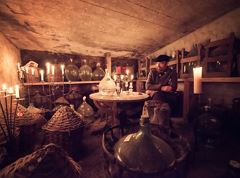 The large Kaiserweis culinary cycle route from Kufstein to Walchsee and Kössen then back via Rettenschöss and Niederdorf. With a length of 71.9 kilometres and altitude gain of 720 meters, this route... 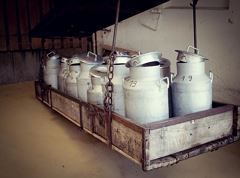 This shorter Kaiserweis culinary route, from Kufstein to Ebbs, Rettenschöss, Wildbichl and back via Erl, has a bit more uphill and downhill. On the route there are plenty of regional cheesemakers,...